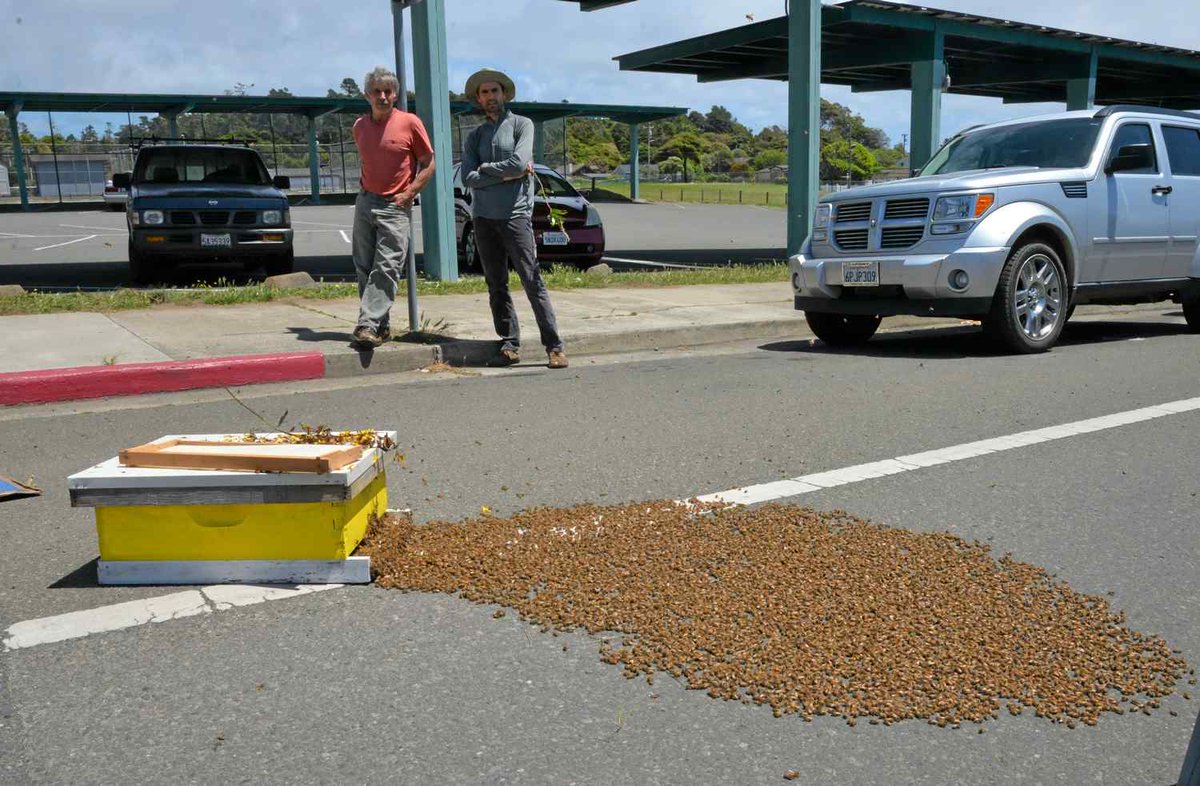 Darrell Paoli and Steve Sandberg stand watch as the bees slowly file into the box, following their queen. Image by Kelci Parks — Advocate

Residents of Fort Bragg put their dedication to being a Bee City on display earlier this week when more than 10,000 honey bees were saved after being noticed on the ground in the northbound lane of Harold Street, near the Redwood Coast Senior Center. The incident began in the early afternoon of Monday, June 12.

The RCSC Executive Director Charles Bush saw the bees and blocked traffic with his car until more help arrived. Darrell Paoli, a local with 15 years of bee experience, was called to the scene and ended up delicately relocating the queen into a hive box. The rest of the bees then followed slowly, which took until about 7 p.m.

“The last of the bees won’t go into the box until the temperature starts dropping,” said Paoli on Monday afternoon.

The Fort Bragg Police Department got a few calls on the matter and a Community Service officer was dispatched to help with traffic control.

Police Chief Fabian Lizarraga saw the swarm while driving by and said he had to get out for a better look.

“My first thought was, ‘I never saw anything like that in LA,’” said Lizarraga. “It was pretty cool how all the bees just followed their queen into the box, and the beekeepers were calm and matter-of-fact about the whole thing.”

Local Steve Sandberg has been raising bees as a hobby for about 10 years and adopted the swarm.

“I don’t really do it for the honey, which may or may not be produced. I do it more as a way to help keep the bee population as healthy as possible,” he said.

Sandberg said Tuesday that the Harold Street bees are now safe and sound in a hive in the backyard of his Fort Bragg home.

As of press time, no one knows how the swarm ended up in the road. Paoli said it’s common for hives to swarm around branches and other things on the ground, but a swarm randomly found in the middle of a road like this one was is a rare occurrence.

Fort Bragg became the first Bee City, USA in California in July of last year. The program encourages educational programs for children and school gardens — both things Fort Bragg prides itself on. The designation, along with Monday’s actions by quick-thinking residents, highlights the city’s understanding of the importance of sustaining pollinators.

Public outrage ensued when dramatic pictures surfaced of a large swarm of dead bees on the ground. The photos were taken by a woman who said restaurant employees told her the bees had been sprayed.

If you encounter a swarm, please call a local bee keeper to assist with the relocation. To connect with local beekeepers, visit beeboldmendocino.org or call 964-8987 (Mendocino County only. -ed.)

← A great day in Mendo

This site uses Akismet to reduce spam. Learn how your comment data is processed.

We use cookies to ensure that we give you the best experience on our website. If you continue to use this site we will assume that you are happy with it.Ok